In addition, Santa Rita will be able to erect LED signage around the pitch at every home Premier League, League Cup and FA Cup match each season for the next three years.

The news comes days after Arsenal secured a new deal with AB InBev-owned London brewery Camden Town, that will see the brewer set up three dedicated bars at the stadium for the start of the new season.

Arsenal will also produce branded content for Santa Rita which will be shared across both companies’ digital and communications platforms, including pieces focused on the Club’s Legends.

Access to Arsenal’s Head Coach and Legends are also included in the partnership.

“We are delighted to continue building on this fruitful relationship with Arsenal, impacting both fans and consumers across the globe,” said Santa Rita chairman Baltazar Sánchez.

“Over the initial three-year period, Santa Rita reached millions of football fans on TV, as well as making our wines available to more than 5 million fans at Emirates Stadium in London.

“In addition, we have launched the exclusive Santa Rita Arsenal co-branded wine, bringing the Arsenal brand closer to our consumers.” 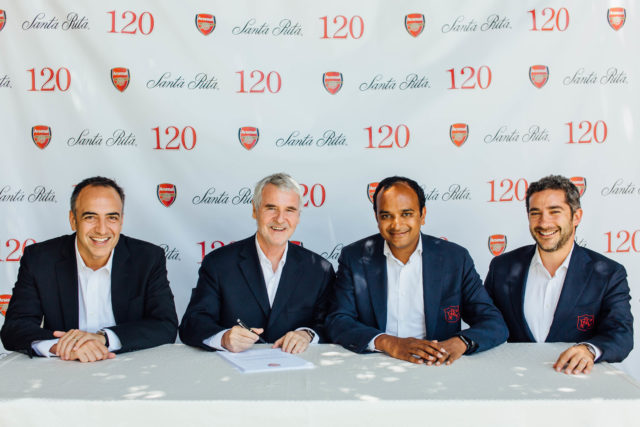 Santa Rita first landed a partnership with the football club in 2016. Focused around its “Living la Vida 120” marketing campaign, the deal was struck to help the brand connect with football fans in key target markets in Latin America, Asia, Europe, and Africa.

“For this new period as Official Wine Partner, we hope to strengthen our scope in key markets such as the UK and the Republic of Ireland; in Asia specifically in China, Japan and South Korea; and in Latin America, Brazil, Colombia and of course Chile,” said Sánchez.

“Since we began our relationship in 2016, we’ve worked with Santa Rita to build its presence in the UK & Ireland, China and Brazil, amongst other markets, and we look forward to working together to target further markets where Santa Rita can strengthen its position.

“Santa Rita’s wine has been incredibly popular with our supporters at Emirates Stadium, so they’ll be delighted that its premium wines will continue to be exclusively poured on match days and at our stadium events.”