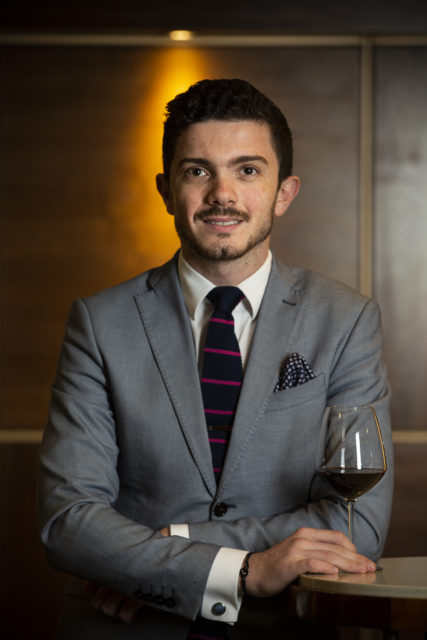 How did you arrive at the position you are in today?

I was pretty much born into the industry; my mother has been in the business for 40 years, so she definitely inspired me! I used to cook with her when I was young, and later on she helped me find my first job in Monaco. We used to spend hours talking about our shifts while filleting fish or making steak tartare. I quickly became very passionate about everything in the industry – from wine and cheese to the sequence of service.

What’s your favourite part of the job?

It’s about sharing a moment with people. This is an industry that’s all about people. We provide an experience based on people, whether it’s the farmers and producers, the winemakers or the chef in the kitchen, and finally we put everything together and serve the guests.

What’s the biggest misconception about the role of a sommelier?

It is much more than pairing wine with food. You are businessman, history teacher, a scientist. There is a huge amount of work behind the scenes.

What’s your go-to drink at the end of a long day?

It really depends, it varies from a San Pellegrino to a glass of Jacquesson. But trust me, if you see me drinking a Bijou cocktail that means I’ve had a very long day!

What’s your most embarrassing front-of-house moment?

I was working at Michelin-starred Le Vistamar at the Hôtel Hermitage in Monaco where we served Bouillabaisse in three stages, adding the fish at each step. I will let you imagine how embarrassed I was when I dropped this beautiful and tasty stew over a guest’s white dress, which probably cost more than my monthly salary.

If you could give your younger self advice when starting out, what would it be?

Find your ‘why’ and remember your ‘why’ when you wake up every morning. Listen to others, and maintain your passion and work ethic. Be ready for long hours, and enjoy what you are doing because you are lucky to do what you enjoy the most.

What bottle sparked your love of wine?

It was at a dinner in Nice with my best friends, a bottle of St Joseph “350m” from David Reynaud 2012. It’s my first memory of tasting a wine and really recognising specific flavours. It had a fruitiness with notes of green pepper that made me realise that fermented grape juice can be really enjoyable!

What to date has been your most memorable wine experience?

It was a private dinner that I hosted in Monaco with chef Joël Garault and my head sommelier for the heads of a big Silicon Valley company. Held in the wine cellar of the Hôtel de Paris, we served a seven-course menu for ten people, serving seven different vintages of La Mission Haut-Brion. A dinner like that, in that legendary cellar, is something I’ll never forget.

Which customer habit annoys you the most?

Spreading their butter on bread with the starter knife!

Who is your inspiration in the gastronomic world?

Chef Yannick Alleno, who is always looking for consistent progress and is really innovative. When it comes to wine, Aubert de Villaine.

I would say an old vintage of Jean-Louis Chave, Hermitage, with a rib of beef on the barbecue with family. Or a Jacquesson 2002 Dizy “Corne Bautray” which I had at Christmas with my girlfriend. Pairing wine with the people you love is more important than the food for me.

Where would your fantasy vineyard be?

Hermitage, for the history, the uniqueness and the terroir. I would even drink Syrah in a coke can.

If you weren’t working in the restaurant industry, what would you be doing and why?

I wanted to be a chef when I was young, but after trying both sides I fell in love with the front of house side, and mastering the art of welcoming people and providing them with an experience.

Which wine do you find it impossible to get along with?

Apologies to my Spanish friends, but it would have to be the 100% Grenache from Spain.

Who is the most memorable customer you’ve ever served and why?

Bill Gates in Monaco. I remember being impressed by his modesty and his relaxed attitude.

What makes you most proud to be working in London?

I think it’s the centre of the hospitality and F&B world. Being in the most competitive and active marketplace in the world is something I enjoy a lot.

A lot of Jacquesson! And probably cases and cases of Jean-Louis Chave to last until Christmas…

Finally, what wine and paired plate would you pick from your list and why?

I would pair Anthony Demetre’s classic English custard tart with a Champagne Brut Nature “Le Mesnil” from André Jacquart. The brioche and buttery notes with hints of dried fruit go perfectly with this dessert. And the non-dosage and freshness of the Champagne balance the light and creamy texture of the tart.